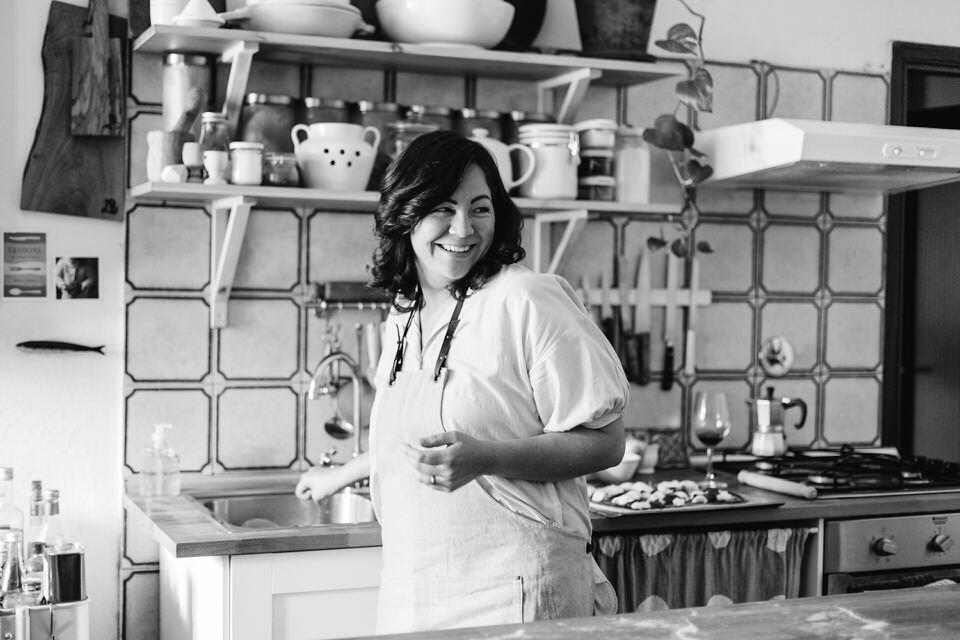 Emiko Davies has written two incredible books about Tuscan food: Florentine and Acquacotta, both available on Amazon and from all good bookshops. You can find her beautiful pictures, recipes, and words on www.emikodavies.com

Tell me a little bit about your life. How did you end up in Italy?

I grew up in a half Australian half Japanese expatriate family, spending my adolescence in China, so travel, I think, is in my blood. I came to Italy almost on a whim – I was studying for my bachelor in Fine Art and wanted to spend a bit of time overseas. Someone suggested Florence to me, and since I have always loved Renaissance art and figured the food would be great, like that I came to Florence to study etching for a semester. I fell in love with it and spent the next few years plotting how to get back again and did, in 2005.

What was the ingredient or dish that made you fall in love with the Italian kitchen?

I can’t say it was one particular ingredient or dish but perhaps it was a book. My mother in law’s copy (or better, her mother’s copy) of Pellegrino Artusi’s Science in the Kitchen and the Art of Eating Well. I remember being amazed to realise that a 120 year old cookbook (it was published in 1891) had the same recipes that you find in Florentine trattorie now, that people choose to eat the same way they have for centuries, to hold onto those traditions. Coming from a very young country, food history is something that I always found fascinating and made me appreciate Italian regional cuisine.

You take your inspiration from historical recipes. Can you recall a recipe that you think has been lost that doesn’t feature in today’s Italian menu but that deserves a mention?

I quite like dishes that make the most of things that would otherwise may have been thrown away – offal, for example, which in most Italian regions was a precious source of protein and never thrown away. And a dish that I have made and loved is sanguinaccio, which is a sort of southern Italian chocolate pudding thickened with fresh pig’s blood. It really is delicious, and if anyone likes dark chocolate with a pinch of salt to exhault the chocolate flavour, they would love it too. I have it on my blog and regularly get disgusted comments on that particular recipe but I think that there is something that many people who are privileged enough to have no knowledge of poverty and no appreciation of history don’t take a moment to understand – it was usually made with the blood of a pig that your family has raised and has slaughtered themselves (and when you have something like this to feed your family, absolutely none of it goes to waste – there is a Calabrian saying that goes along the lines of, you eat everything but the squeal). The fresh blood of the animal (while warm, before it coagulates) is collected and put into a pot where it is mixed with cocoa and chocolate, sugar, sometimes candied citrus. The blood thickens as it cooks (much like eggs, which you can use today, in its place). Today it’s a disappearing dish because not only are younger Italians put off by the idea of blood but also because less and less families keep their own pig unless they have a farm, and even then, I don’t think many are slaughtering their own animals. So it’s hard to get the blood and it’s hard to buy it too – since 1992 a law in Italy has forbidden the sale of fresh pig’s blood from butcher shops in certain regions, so that means sanguinaccio is now usually made with flour or eggs used a as a thickener. It’s easier but that bit of history and tradition (and fascination) will become lost.

Cooking is a journey of discovery. What has been your best moment of discovery this year?

I finally bought a cast iron pan at the beginning of this year and I absolutely love it. It’s not for everything – you can’t cook anything acidic in it, and I’ve found that something about it reacts with the flavour of mushrooms, so certain ingredients don’t do well in cast iron, but it’s very versatile and is fantastic for browning, crisping or frying as it holds the heat very, very well, which is also what makes it great even for baking pastries or crostata in it. I went looking for this pan after an elderly woman who I met in Capalbio in southern Maremma told me she cooked in one (and she was a professional cook for over 40 years, so knows what she was talking about – she gave me many good tips, along with this one!).

Your repertoire must be very international, yet living in Tuscany we (fortunately) have access to local seasonal produce almost exclusively – what ingredients do you miss in your larder?

I do miss being able to easily get certain Japanese and Chinese ingredients. I can find most basic ingredients in Florence and have often been pleasantly surprised even to find very nice fresh vegetables and herbs, like lemongrass and Chinese chives or bok choy, which years ago was unheard of. But sometimes I want more than just the basics! I’ve just bought myself a starter kit for fermenting my own beans to make my own Chinese bean paste!

You have a clear talent and passion for photography, is this something you have just nurtured over the years or have you also studied?

I started studying photography a bit during my undergraduate degree in Fine Art. At the time, it was all exclusively black and white, in a darkroom. And when I came to Florence in 2005 and met my husband, I started taking another darkroom course in Florence, where I eventually worked as a teacher later, too. Digital photography, however, is still relatively new to me and I am self-taught in the editing process. I still prefer film and try to include it in my cookbooks when I shoot the location images.

What is the most undervalued ingredient in your larder?

I love good salt and try to seek it out, and have various types of salt for different purposes, I think it makes such a difference to your dishes to not only have the right kind of salt but to understand how that salt tastes and works in your cooking so you can use it properly – when you get to know a salt, you learn exactly how to use it and can season things perfectly with it. Underseasoning can be just as disappointing as overseasoning so it’s an important balance to understand.

As an expatriate in Italy, what do you love and hate most about this country?

I have always loved the layers of history and age – I live in Florence where this is arguably the thing that attracts most worldwide visitors to the place! It’s beauty is overwhelming and something I will never take for granted – I know I am living a lot of people’s dreams! I’m living my own dream! But on the other hand, it’s not perfect (and no where is) — it is particularly, ridiculously bureaucratic, many things just do not make sense to me and probably never will! It’s also just too far away from Australia to make it easy to live away from my family, but that is something I will always have to battle with myself!

Desert Island oil: If you had to take just one extra virgin olive oil with you, which one would it be?

It may not be from one particular place but more a particular time. I absolutely fell in love the first time I visited a frantoio with crates of my friend’s olives from her property between Florence and Arezzo and I watched that stream of thick, bright green olive oil coming out – that oil there, the very moment, with the intense perfume of pressed olives all around. That’s my desert island oil.